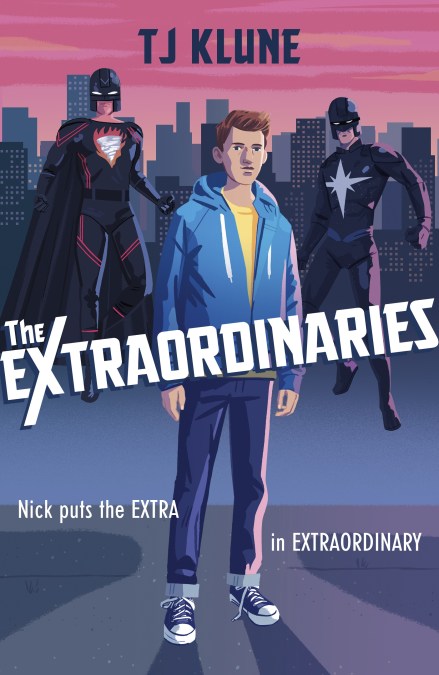 In Nova City, there are people capable of feats that defy the imagination. They’re called Extraordinaries.

There is Shadow Star: a protector who can manipulate darkness in his quest to protect those who cannot protect themselves.

His arch-nemesis is Pyro Storm: an Extraordinary capable of controlling fire who is bent on bringing Nova City to its knees.

And then there’s sixteen-year-old Nicholas Bell: who isn’t Extraordinary in the slightest.

He’s Shadow Star’s number one fan, writing fan fiction of their adventures together and dreaming of a day where he too dons a costume and fights crime. Too bad ADHD isn’t a superpower, otherwise Nick would be golden.

Instead of stopping villains and their convoluted schemes of global domination, Nick must contend with starting his junior year, a father who doesn’t trust him, and a best friend named Seth, who may or may not be the love of Nick’s short, uneventful life. It should be enough.

And it is…until a fateful encounter with Shadow Star forces Nick to realize his true destiny. He’s tired of being ordinary, and he’ll do whatever it takes to become something more.

Thank you very much to Tor Teen for providing me with a copy of this novel in exchange for an honest review.

THE EXTRAORDINARIES IS SET FOR PUBLICATION 14 JULY, 2020.

“I can become something better. Something more.”
She looked troubled. “Why do you have to be an Extraordinary to be better? Why can’t you just be extraordinary with what you already have?”

The Extraordinaries is the YA queer superhero novel that I’ve been waiting for and to say it was a gem would be an understatement. I’ve been a fan of TJ Klune for years now and to get the chance to read his YA debut has been such an honour. I was in stitches from laughter and pages later I would be on the verge of tears. It’s safe to say that TJ Klune has done it again!

Nick lives in a city with superheroes and he is obsessed with them. Having ADHD means he spends a lot of his time on his special interest by writing fanfiction of himself and his crush, Shadow Star, which is one of the more popular Extraordinary fics. Aside from his fanfic, Nick spends his days dealing with the challenges of junior year, trying to get his father to trust him again, and trying not to crush on his best friend, Seth, cinnamon roll personified. But then, Nick has a fateful encounter with Shadow Star that has Nick realising his true potential: he is going to become an Extraordinary.

Nick is the sweetest main character I’ve read in a long time. The boy is basically a hug in human form. His ADHD is spot on, I could relate to him so much, from his scattered thoughts, to his inability to concentrate (until it comes to his latest obsession), to his ability to speak before his brain catches up. When I say Nick had me laughing so much, I had to take a five minute break from reading, I’m not exaggerating. Nick’s sense of humour, his actions and reactions, are so damn hilarious. Nick is definitely one of the greatest YA protagonists out there and I can’t wait to read more about him in the sequel.

“You’re lucky I know everything there is to know about being an Extraordinary. I’m pretty much an expert. I write fan fiction, after all. Thank god you have me.”

My other favourite character was Seth. Oh my gosh, this boy! He has a very obvious crush on Nick, but of course Nick is super oblivious. This is something Klune has always done incredibly well: the oblivious romantic interests. Nick is also in love with Seth, he’s just unable to see that, but he does wax poetically about Seth’s many virtues, especially how much Seth is just an adorable cinnamon roll.

Among the fantastic side characters are Gibby and Jazz, two of Nick and Seth’s best friends who are also in a relationship together. These two sapphic girls are adorable together and I shipped them from the first time they showed up on page. Gibby is a badass, who cuts first and asks questions later. She’s highly protective of her friends, especially Jazz, but is also secretly a romantic. Jazz used to be part of the popular crowd until she met and fell in love with Gibby, so now she spends her days with the weirdos. Jazz is so adorable and comes across as a little oblivious, but she’s actually the one who pays the most attention. And finally, there’s Owen, Nick’s sort-of-not-really ex-boyfriend who forces his presence on the group even though nobody really likes him because he’s a rich, stuck-up. But Nick can’t help but still care for him …

I had so much fun reading The Extraordinaries. The book is super tropey, just imagine yourself watching a superhero movie — but it’s aware of those tropes and even makes fun of them. And I’m not saying it’s tropey in a bad way, either. It’s something I expected and looked forward to, what with the superhero element. But even though the novel features tropes, the book still manages to surprise me by flipping those tropes on their heads. I’m not going to say anymore than that, because I don’t want to spoil anyone! But I can so perfectly see this book as a movie and I sincerely hope it has the chance to become one some day!

If you’ve always been interested in reading one of TJ Klune’s books, then I highly recommend starting with The Extraordinaries. You’re in for a fun romp of a time. And if you’re a long-time fan of Klune’s books, you’re going to find a new favourite here too.

5 thoughts on “ARC Review: The Extraordinaries by TJ Klune”