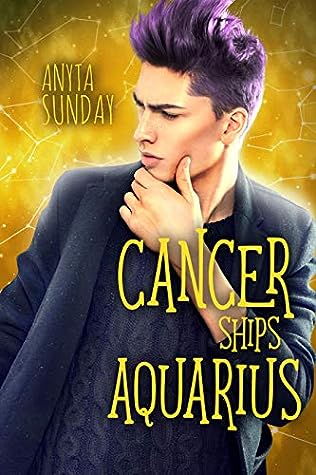 Prepare to dip your toe into the biggest adventure of your life, Cancer. There’s romance in the air, and it smells deliciously salty.

Dumped by the fifth girl in two years and abandoned by his best friends, Reid Glover is alone and in need of a home. Desperate, he interviews to become a live-in manny aboard widowed Sullivan Bell’s yacht, the Aquarian.

The job? Not to look after thirteen-year-old Joanna. No, this child-mastermind needs Reid to befriend her dad, urge him to participate more in family life, encourage him to date, oh, and become his closest confidant and help him unleash his bottled emotions. No pressure. At least he’s not entirely out of his depth.

Okay, so he may have a slight aversion to the ocean. And possibly attract more than his fair share of misadventure. But he is a pro at crying. Watch out, Sullivan. Reid is on his way with a family-sized carton of tissues. He will help Sullivan through his fears. Will help him find love again.

Will absolutely not fall for him in the process . . .

Caution, Cancer, how long will you fool yourself?

Cancer Ships Aquarius (Signs of Love #5) is an MM opposites-attract romantic comedy featuring a misadventure prone manny and a blunt widower. More wit, banter and bad puns – and even more heart-stopping slow burn! Can be read as a standalone.

Thank you very much to A Novel Take PR for providing me with a copy of this novel in exchange for an honest review.

“Are you telling me that you’ll never throw me overboard?”
“I’m telling you that afterward, I’d die in shark-infested waters to get you back.”

I always have a very good time reading Anyta Sunday’s novels and her newest release in the Signs of Love series is no exception. Except this time I was a little more excited because the love interest’s star sign is Aquarius … like myself!

Cancer Ships Aquarius follows Reid as he finds himself jobless and loveless once again, and applying for a nanny position (and lying a lot on his resume). Unbeknownst to him, the 13 year old girl, Joanna, he thought he was taking care of wants to hire Reid to take care of her father, Sullivan, instead, who hasn’t lived since his partner died years earlier. Reid is hired but soon finds himself falling for his boss and the life he’s made with this broken little family.

Like all of Anyta’s books, Cancer Ships Aquarius is sweet, funny and chock-full of a slow-burn romance between oblivious characters. I could feel myself blushing and giggling like mad over Reid and Sullivan’s banter and unintentional innuendoes. Even though this is a romantic comedy, it was surprisingly heartbreaking too because Sullivan is a widower … but there’s another reason I can’t talk about because it’s a spoiler! Let’s just say, there’s a reason Sullivan loves audiobooks and there’s a reason for the quotes in between chapters that are from a book. And when I found out those reasons, I balled my eyes out.

“You want to protect the world and all the people in it.”
Sullivan harrumphed. “The ones I like.”

As an Aquarius, I paid particular attention to Sullivan as the Aquarius character, and let me just say, Anyta gets it right! I saw myself so much in Sullivan from how he hates when the status quo is interrupted, to enjoying telling people what to do, and to writing extensive to-do lists — WOW, THAT IS ALL ME. (Especially that above quote) Not to forget, Sullivan’s birthday is February 12 and mine is February 10! Love to see it. Sullivan was someone I could personally connect with, but you don’t have to be an Aquarius to love him. He’s a bit stern but he has a massive heart, and his relationship with his daughter is wonderful and touching.

Reid has officially joined the exclusive club of adorably dumb characters that is made up of Anyta’s other characters: Theo, Percy, Wesley and Zane. He’s just such a sweetheart who is likely to cry at a moment’s notice, but like a true Cancer, he spends his life taking care of people and ensuring they become the best they can be. Speaking of other characters, I loved the cameos of Theo and Jaime and, briefly Wes, and I loved knowing that Percy and Cal got married 😭.

I also just wanted to briefly mention how happy I was when Reid said he’s bi, but also that he had never been with a man before — because this is something a lot of bisexual people experience. I love how that still makes him queer and I love how unashamedly bi Reid is. Great job at this Anyta!

If you love slow-burn romances, you need to read Cancer Ships Aquarius and all of Anyta’s other books in the Signs of Love series. You will laugh, you will cry, and you’ll find a new favourite read.