So July was the month of the #IronTomeAThon reading challenge, a readathon about reading adult fantasy, based on A Song of Ice and Fire! I had an absolute ball participating in this readathon, and want to thank Aimal for creating it! Here’s hoping she hosts it again sometime soon.

Let’s see how I went! 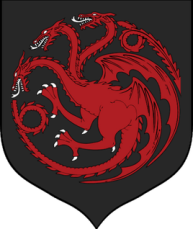 But I personally earned …

WINTERFELL: READ A BOOK SET (PARTIALLY OR FULLY) IN A COLD ENVIRONMENT 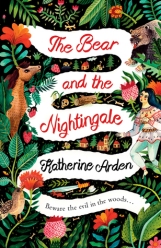 I was expecting a bit more from The Bear and the Nightingale. Originally, I’d heard so many amazing things about it and so I went in with high expectations. It wasn’t a bad book per se, but it was very slow and there was hardly any plot. Now usually I love books like this — especially for fantasy ones — but that’s only when I love the characters … and unfortunately, I just didn’t care here. Vasya was a pretty awesome main character, but everyone else got on my nerves (except for Morozko). Maybe that was due to the fact that this book was historical fantasy — based on 13th century Russia — and many characters were misogynistic? That’s a possibility but I’m usually good at separating my personal feelings from the plot.

However, I will be giving the sequel a chance because I’ve heard the series gets much better after the first book. Here’s hoping I enjoy it! 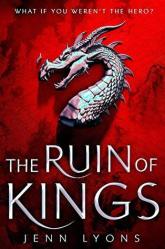 For these two prompts, I read The Ruin of Kings which was my favourite book that I read during the readathon. Seriously, this book is SO GOOD! It’s about a young man who finds out he is the son of one of his country’s ruling princes and is brought into his family’s lives. But the book is set during three timelines: when Kihrin finds out about his family, the months later when he is sold as a slave, and then years later when he is imprisoned. His jailer tells the story about everything that leads up to him meeting his family, while Kihrin tells the story about him being sold and what happens after that. Then, at about the 3/4 point, both stories come to an end and we find out why Kihrin is imprisoned and he continues his story. And we also have a third narrator who writes the footnotes!

I know a lot of people think this book is confusing and tend to give up on it, and while it definitely takes a little while to get used to at the beginning, eventually you will get used to it! And once you do, it’s an amazing story. Every single chapter ends on a cliffhanger and you are dying to know what has happened. I’m so freaking excited for the sequel!

SUNSPEAR: READ A FANTASY BOOK INSPIRED BY A NON-WESTERN SETTING OR READ A BOOK BY AN AUTHOR OF COLOUR OR AN INDIGENOUS AUTHOR 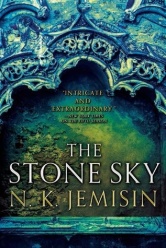 For this prompt, I read the third and final book in The Broken Earth trilogy, The Stone Sky. And it was genuinely so freaking amazing. I am in awe of N.K. Jemisin’s brain because everything came together in such an amazing and satisfying way. In this book, we get to find out where the oregenes, guardians and stone eaters came from and let me tell you right now: you’ll never guess it.

I cried a lot in this book and have to say that Essun is definitely one of my favourite characters now. She’s so strong and powerful, but I think she just needs a hug, the poor woman. She’s been through so much. AND ALABASTER! 😭 I loved seeing his diaries in this book and I can’t wait for Essun and Alabaster to see each other again one day. Although I did love Essun and Hoa’s ending together. Anyway — read this series!

OLDTOWN: READ A BOOK ABOUT OR INVOLVING AN INSTITUTION OF KNOWLEDGE OR TRAINING 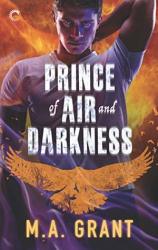 I ended up changing the book I originally chose for this prompt because I didn’t think I had it in me to read another 800 page book (it was The Name of the Wind), so I decided to read Prince of Air and Darkness instead. This book is about a young human man Phineas, who has the ability to access the ley line and use magic, when magical creatures should only be able to do that. So he ends up going to magic school and this book starts when he’s in his final year. He and his roommate, fey Prince Roark, hate each other, but Roark is constantly saving Phineas whenever he gets himself into trouble.

I liked this book for the most part, but the ending kind of went off the deep end a bit? But I did enjoy the magical elements, and the romance between Phineas and Roark was great.

ASSHAI: READ A DARK/GRIMDARK FANTASY OR READ AN URBAN FANTASY 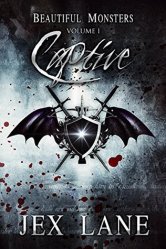 For this prompt, I chose a grimdark fantasy romance novel which isn’t a book genre I even thought existed. And sadly I didn’t enjoy it as much as I thought it would. But I have heard that the other books in the series are much better — but also much sadder.

Anyway, it’s about a vampire named Matthew who is kidnapped by an incubus general, Tarrick, and becomes his slave. Matthew eventually finds out that his identity isn’t always what he thought it was, and he becomes one of the only creatures in his world and people start to take notice of him. The plot is really hard to explain without spoiling it, but basically it’s kind of a romance set amidst the backdrop of a paranormal war with political issues abound too.

But also be aware that this book contains rape/non-consensual sex so be careful!

Other fantasy books I read 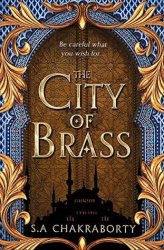 I devoured The City of Brass in a couple of days but afterwards I felt like I was dead because the book was so good. Seriously, if you’ve ever wanted to read this book — do it! It’s about a young woman named Nahri who discovers that she is a Daeva, a type of djinn, and is escorted to a magical city called Daevabad by a powerful Daeva, for her protection. There, we meet Ali, the younger son of the djinn king, who is secretly trying to protect the shafit, who are half Daeva, half human. There’s so much political intrigue in this book, along with some wonderful characters. Easily, my favourite character is Muntadhir who is depressed and bi and in love with his friend Jamshid, but they can’t be together 😭. And Nahri is one of my favourite main characters ever and if anything happens to her I will sue Chakraborty. AND DARA 😭. I’m not going there. This book was also my favourite read of the readathon! 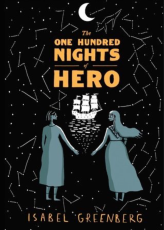 I also read the graphic novel The One Hundred Nights of Hero which was awesome! It’s such a weird comic, because the lore is strange but super interesting too. I want to know more about this world! Basically, a horrible man makes a bet with his friend: if his friend can bed his wife in 100 days, he will give his wife to his friend. So his wife and her handmaiden, Hero, who are in love, concoct a plan to trick the man for 100 nights by telling him stories about women. This world is really misogynistic, which irked me sometimes, but I loved the stories about the amazing women. So many of them had me in tears. 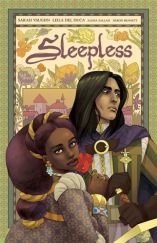 I also read the two graphic novels in the Sleepless series. This series is so amazing and I want more people to read it! It’s basically about a princess who is in love with her bodyguard, who has pledged himself to her. He can never sleep: he watches over her 24 hours a day, and has done so for three years. And now, with her uncle taking the throne, Lady Poppy is in danger as someone at court is trying to kill her off. I loved the romance in this series: Poppy and Cyrenic really love each other, and they’re just so adorable 😭. The artwork was also beautiful and now I really want more historical fantasy graphic novels please!

Did you participate in this challenge? What House did you join? How many books did you read? Let me know!

New Fence book just dropped! 👀
Thank you so much to @ej_beaton for sending me a copy of her debut fantasy novel, The Councillor. I was already so excited to read this book by an Australian author, and now that I own a copy, I'm even more excited!
Having fun rearranging my bookshelf with signed copies!
Library haul!
I've heard nothing but good things about The Unbroken by C.L. Clark so when I saw it at my local bookstore, I knew I had to get it! It's a North African inspired fantasy featuring a sapphic romance 👀
I'm so excited to finally get my hands on the signed Illumicrate edition of Winter's Orbit by Everina Maxwell!