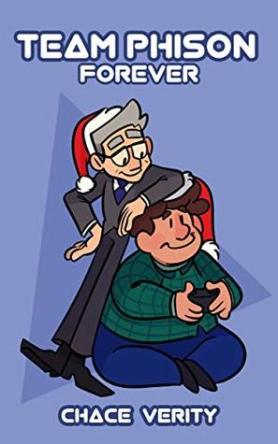 Tyson Falls is ready to get married. After being disowned by his parents, his adorably grumpy boyfriend has made cautiously optimistic Tyson embrace the concept of family again. Armed with a ring and the newest video game, Tyson has plans for the nerdiest proposal.

Life throws a wrench in Tyson’s plans when he meets someone online during a multiplayer match. Someone that makes him rethink if he’s ready to start a family—the half-sister he never knew he had.

With the harsh reminder of how messy families can be, Tyson plunges headfirst into despair. Phil doesn’t deserve to be dragged into such a terrible bond. As Tyson wades through trauma and tries to push away the concept of family, he keeps turning to the man he loves most—the person who challenges him to redefine family.

Thank you very much to Chace Verity for providing a copy of their novel in exchange for an honest review.

It’s hard to believe how much Team Phison has levelled up since that fateful match.

I first read Team Phison in 2017 and the second I finished it, I went back to the beginning and read it all over again. It’s genuinely one of the loveliest and sweetest books I’ve ever read, and, like many other fans of the book, I’ve been wishing for a sequel to see how our beloved boys, Phil and Tyson, ended up.

Team Phison Forever follows Tyson’s perspective this time round, and our beloved nerd is about to ask the love of his life to marry him. He’s finally ready to have a family again after many years, and after his own birth family disowned him. But things take a turn when Tyson discovers a secret half-sister he never knew about and Tyson begins to spiral, questioning everything and wondering if he deserves to have a family after all.

While Team Phison was literally a ball of fluffiness in book form, Team Phison Forever definitely has a different tone from the offset. It’s a bit darker than its predecessor, with Tyson in a very bad place and trying to deal with his complex feelings about his family. My heart just broke for Tyson in almost every chapter — he’s still his typical lovely self, but there’s an air of tension and anxiety surrounding him, which so many people notice and want to help him through. Like Tyson, I struggle with a mental illness and I can definitely see parts of myself in him, particularly with his struggle in understanding that people are there for him and want to help him. A big part of (some) mental illnesses is believing that you’re alone, even though there’s plenty of evidence to the contrary, but your brain doesn’t let you understand that — that’s what happens to me and that’s definitely what happens to Tyson.

Why is family a word that makes me want to cry?

Tyson’s feelings are 100% valid, and it’s heartbreaking to read through because you know that even though he may not have the love and support of his birth family, he’s managed to form a wonderful family full of friends, both his and Phil’s, who absolutely adore and love him. For so long, all he had was his video games, and he’s still a bit surprised that he has found his own little family. If you want to learn more about one of my favourite tropes, the found family, please check back on May 16 for a special guest post by Chace Verity!

I also loved Verity’s writing. Their prose flows so sweetly, it’s almost like Tyson was standing right there in front of me. His voice is distinct and honest and beautiful, and you just want to wrap him in a massive hug. And reading about grumpy Phil again was so much fun! My absolute favourite parts of the book is the scenes where Phil is crabby with everyone but Tyson — and how Tyson is fully aware of this, and loves him even more because of it.

Team Phison Forever is definitely a darker novel than Team Phison, but it’s just as loveable. I recommend you take heed of the content warnings, but just remember, Tyson and Phil will get their happy ending … it just takes them a little while to get there! 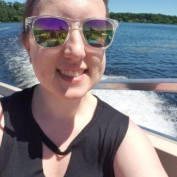 Chace Verity (she/they) is publishing queer as heck stories with a strong romantic focus, although friendships and found families are important too. Chace prefers to write fantasy but dabbles in contemporary and historical fiction as well.

An American citizen & Canadian permanent resident, Chace will probably never be able to call a gallon of milk a “four-liter.”