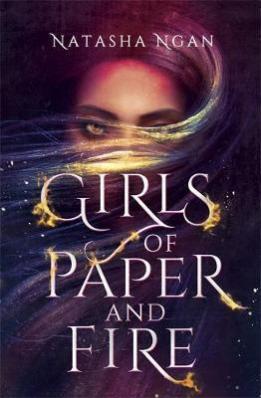 Each year, eight beautiful girls are chosen as Paper Girls to serve the king. It’s the highest honor they could hope for…and the most cruel.

But this year, there’s a ninth girl. And instead of paper, she’s made of fire.

In this lush fantasy, Lei is a member of the Paper caste, the lowest and most oppressed class in Ikhara. She lives in a remote village with her father, where the decade-old trauma of watching her mother snatched by royal guards still haunts her. Now, the guards are back, and this time it’s Lei they’re after–the girl whose golden eyes have piqued the king’s interest.

Over weeks of training in the opulent but stifling palace, Lei and eight other girls learn the skills and charm that befit being a king’s consort. But Lei isn’t content to watch her fate consume her. Instead, she does the unthinkable–she falls in love. Her forbidden romance becomes enmeshed with an explosive plot that threatens the very foundation of Ikhara, and Lei, still the wide-eyed country girl at heart, must decide just how far she’s willing to go for justice and revenge.

Thank you very much to Hachette Australia for providing a review copy of this novel.

We might be Paper Girls, easily torn and written upon. The very title we’re given suggests that we are blank, waiting to be filled. But what the Demon King and his court do not understand is that paper is flammable.
And there is a fire catching among us.

On the surface, Girls of Paper and Fire is an epic tale about a girl fighting back against a demon king who has enslaved her people. But on a deeper level, it’s about standing up for yourself, finding your inner power, and understanding that even the smallest person can change the course of history. It’s a powerful novel, and one that is so sorely needed in today’s world climate.

The moment this book was announced I knew I would love it, but even still, I didn’t fully comprehend how much I would adore this book. I was hooked from the very first page, and that’s not something I say often. Natasha Ngan’s writing draws you into the story, to the point where you feel as though you are standing next to the characters yourself. Ngan’s prose is captivating, and you can tell how much research and work went into creating this Asian-inspired fantasy tale.

The world of Girls of Paper and Fire contains three castes: the Paper caste, those who are fully human; the Steel caste, those who are half-human and have some animal-demon features; and the Moon caste, those who are fully demon — and who are the highest caste. The demons control everything in Ikhara, and have only grown in power over the last 200 years. Each year, the Demon King selects eight Paper girls to be his concubines. They must live in the palace for one year, and after that, they continue to work for him as prostitutes, mainly for his generals and the rest of his court. Many believe the chance to become a Paper girl is an honour, a chance for some in the Paper caste to elevate their status, and that of their families. But Lei just wants to be left alone. The Moon caste has already taken her mother from her — she doesn’t want them to take her freedom too.

Demon men can take what they want. Our homes. Our lives. Our bodies.

But a demon general, out of favour with the king, kidnaps Lei because of her intriguing gold eyes, and forces her to become a Paper girl — the first and only time there has been nine girls. Life in the palace is a nightmare, and she is beyond terrified of meeting — and sleeping — with the king. I have to warn readers this book does not shy away from sexual violence, and the trauma that surrounds being assaulted and raped. This can be a very harrowing topic for many people, but Ngan carefully dissects rape culture in a world where women are not afforded the same rights as men — a world that uses rape and violence and misogyny as a way to gain more power. It’s insidious and systemic. The men in this world commit these acts of assault because they can, because no one will stop them, and because they have a monarch that allows them to. Ngan shows all the ways in which this fantasy world infested by demons is so remnant of our own.

But despite the constant state of anxiety Lei lives in, she gains a modicum of hope when she befriends Wren, another Paper Girl. I can’t even begin to tell you the importance of having sapphic representation in all kinds of genre fiction. Lei and Wren become friends over quiet nights and mornings full of talking, and slowly, their friendship develops into a romance. But this is also a world where female sexuality is repressed and moderated. It’s a world that contains same-sex couples, but only in the form of two men together. And two Paper Girls certainly are not allowed to be together, when all their concentration should be on the King.

Her kisses heal the parts of me that the King broke. They tell me: You are strong, Lei. You are beautiful. You are mine. And, always, most important: You are yours.

Even so, Lei and Wren risk everything for one another. Together, Lei and Wren learn that they are worthy of love, and that no one — not even a king — has a right to their bodies and hearts, unless they’ve given to him consensually. Lei and Wren’s romance is a slow burn, and it’s worth the wait. They’re probably my favourite f/f couple.

Girls of Paper and Fire is such an important novel. It’s about survivors of sexual assault who learn that they are strong enough and powerful enough to bring down a king. It’s about two girls who reclaim their autonomy and seek to enforce a much-needed change in their society.

Have you read Girls of Paper and Fire? Did you enjoy it as much as I did? Let me know!

9 thoughts on “Review: Girls of Paper and Fire by Natasha Ngan”