It’s Not like It’s a Secret by Miss Sugiura is the cutest f/f contemporary YA book that I’ve read in a long while.

I read this book on recommendation by my friend, Steph, and I read it in three days. I learnt so much from this book, from different cultures, to how Americans experience high school and live with racism, to what it’s like growing up different from your peers but eventually finding a home.

Below is a list of secrets about the novel, explaining why this book should be on your TBR.

Sixteen-year-old Sana Kiyohara has too many secrets. Some are small, like how it bothers her when her friends don’t invite her to parties. Some are big, like that fact that her father may be having an affair. And then there’s the one that she can barely even admit to herself—the one about how she might have a crush on her best friend.

When Sana and her family move to California she begins to wonder if it’s finally time for some honesty, especially after she meets Jamie Ramirez. Jamie is beautiful and smart and unlike anyone Sana’s ever known. There are just a few problems: Sana’s new friends don’t trust Jamie’s crowd; Jamie’s friends clearly don’t want her around anyway; and a sweet guy named Caleb seems to have more-than-friendly feelings for her. Meanwhile, her dad’s affair is becoming too obvious to ignore anymore.

Sana always figured that the hardest thing would be to tell people that she wants to date a girl, but as she quickly learns, telling the truth is easy… what comes after it, though, is a whole lot more complicated.

The author Misa Sugiura, is, like her protagonist Sana, Japanese American. She comes from a long line of samurais, poets, and priestesses.

She lived in Japan for three years, before she moved back to America and became an English teacher. As a teacher, she interacted with many Asian, Latinx, and LGBTQ+ students who actually inspired her to write It’s Not Like It’s a Secret!

Secret 2: It’s about being proud of one’s culture

The protagonist Sana is Japanese American, and in the novel, both of her parents immigrated from Japan in their youth. Her father’s family comes from samurais and scholars, and her mother’s side comes from tea farmers.

There’s a great part in the novel where Sana talks about travelling to Japan and meeting her Baba (dad’s mum), who showed Sana an ancient samurai sword that had been in their family for generations.

We learn a lot about Japanese culture in this novel, including the importance of respect, the traditions involved in marriage, and Gaman. From my understanding, Gaman means to endure with patience and dignity, which is a significant theme and topic throughout the novel.

There are times throughout the book that Sana is embarrassed by her Japanese heritage – as any teenager is sometimes embarrassed by their culture – but the book also focuses on how you should be proud of where you come from as well.

Secret 3: It opens up a dialogue 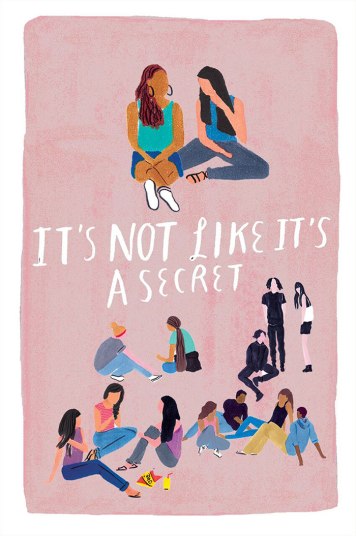 Not only is It’s Not Like It’s a Secret an #OwnVoices book, but the supporting characters are all diverse as well. Sana’s love interest is Mexican, and the friends that Sana makes when she moves to California are Vietnamese and Chinese.

This book also features a lot of important conversations about racism and stereotypes. I know a lot of readers were uncomfortable by the inclusion of these discussions, and so didn’t like the book for that reason (and that’s totally their prerogative), but I would suggest that Sugiura did this on purpose.

The casual racism and overt stereotyping is very obvious so as to make the reader uncomfortable, and even open their eyes to how these small acts of racism – that we don’t necessarily think are racist – can actually be really harmful. These scenes are very provocative and are there to open up a dialogue about casual racism and how we can all learn to be more inclusive.

It’s Not Like It’s a Secret features a super lovely f/f romance between Sana and a girl named Jaime. The romance is so sweet with both of the girls crushing on one another, but both being too shy to do anything about it.

Sana slowly comes to terms with her sexuality, although it’s a struggle as she is afraid to come out to her strict, traditional parents. Gradually, Sana falls hard for Jaime, and although having a girlfriend is harder than she thought, their relationship is strong and lovely to read in a YA book.

A Bildungsroman is a novel that deals with a young person’s psychological and moral growth – a coming of age in which the character changes and learns.

In It’s Not Like It’s a Secret, Sana undergoes massive changes in her life. She is forced to move across the country, make new friends, confront her father’s affair, come to terms with her sexuality, and become proud of her Japanese heritage.

I could go on about the many other awesome secrets in It’s Not Like It’s a Secret, but you’ll just have to read the book to find out the rest.

Have you read It’s Not Like It’s a Secret? Did you love it as much as I did? Are you planning on reading it now that you know a few secrets? Let me know!