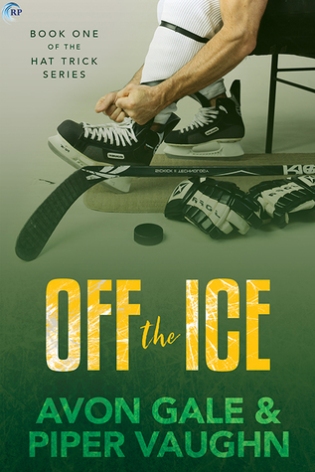 Tristan Holt is nothing if not pragmatic. Despite a flourishing career as a defenseman for the Atlanta Venom, Tristan knows he can’t play hockey forever. One day he’ll retire—if an injury doesn’t force him to hang up his skates first. His backup plan? Finishing his business degree. But he doesn’t count on a very inappropriate attraction to his standoffish sociology professor, Sebastian Cruz.

Sebastian is on the bottom rung of the Sociology Department at Georgia State. He has his sights set on tenure, and he can’t afford to be distracted, especially not by a sexy student with a body straight out of Sebastian’s dreams. No matter how much Tristan tempts him, that’s one line Sebastian won’t cross. At least not until summer classes end. After that, everything is fair game.

But Sebastian lives loud and proud, and Tristan is terrified of being the first out player in the NHL. Neither of them can afford to risk their hearts when they can’t imagine a happily ever after. The problem is, unlike hockey, when it comes to love, there are no rules.

“You know, for all your preaching about privilege and tolerance in class, you seem pretty biased yourself. Maybe it’s time for a bit of introspection, Professor.” “Lust made people stupid sometimes. It was one thing when he and Sebastian simply couldn’t keep their hands off each other. It was an entirely different scenario when lust turned into need and need turned into love.”

Off the Ice is the newest novel from the magnificent minds of Avon Gale and Piper Vaughn, who gave us the delightful Permanent Ink. Following on from Gale’s well-known love of hockey, Off the Ice is a little different from the usual sports romance: the focus is less on the sport, and more on the importance of life after hockey. Off the Ice is a cute, warm, and inspirational novel.

I wasn’t expecting such a sweet, tender novel, but once I realised the book was going in that direction, I was so excited. Everything about the book was wonderful from the characters, to the plot, to the writing.

I related so much to Sebastian, because I too am a grouchy nerd with a resting bitch face. Sebastian frequently discussed his Puerto Rican culture in relation to sociology and privilege, which I thought was incredibly important. He also talked about the difficulties of coming out in a Catholic environment, a hyper-realistic trouble, and one many readers will be able to empathise with.

“Not bad, Professor. I’d say definitely a ninety-four. At least.”

But Tristan, the hockey player, was an actual cinnamon roll. I have never come across a sweeter character than Tristan, someone who just wants the best for everyone, and is determined to ensure he has a purpose for his life after hockey. I love that the book focuses on Tristan’s drive for education and the importance of getting a degree – it’s something you rarely see in sports in general, but it makes sense too. The athletes have to do something after they retire!

Tristan is also closeted, but does want to come out – he is not afraid of being gay, but he is afraid of the reaction that will undoubtedly affect his career. The main problem is the overt homophobia entrenched within any male-dominated sports. While many sports clubs are trying to do better, it’s still incredibly hard for athletes to come out and this is a major issue within the novel.

“Already Tristan resented the process of coming out, that it even had to be a thing. Straight might be the default, the status quo, but why did it matter that he wasn’t? It shouldn’t.”

So, I love teacher-student relationships – COLLEGE ones; I feel I have to make the distinction clear – and the relationship was developed perfectly in Off the Ice. The romance was just so loving and respectful, I had a huge grin on my face for basically all of their interactions. At the beginning, their budding relationship is fraught with miscommunication (yes!) and incorrect perceptions of one another (yesssss!), and I simply adored reading about them moving beyond that and falling for one another.

Off the Ice is a delightful queer sports romance that readers will appreciate. It’s a little different from the usual sports romances out there, but that is most definitely a positive. The romance was sweet and the relationship problems realistic, but ultimately this book shows how appearances can be deceiving.

Details: For seven days, from 10/28 – 11/3, stop by each of the hosts’ Instagram pages to see their photos of Off the Ice, and take part in the tour challenge.

Tour challenge: Comment on any of the host photos and use the hashtag #OfftheIceTour. Tag any of the daily hosts, tag the authors (@pipervaughn and @avongalewrites), and A Novel Take PR (@anoveltakepr) and you’ll be entered in the giveaway.

You can enter on every post from one of the hosts!

The prizes: Signed paperback + swag pack from the Off the Ice Hockey team, The Venom:

One thought on “Instagram Tour: Off the Ice by Avon Gale and Piper Vaughn”