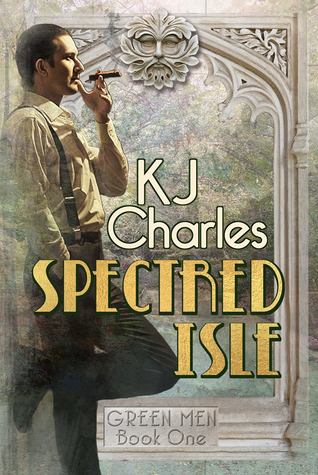 Thank you very much to K.J. Charles for providing a copy of her novel in exchange for an honest review.

K.J. Charles’ long-awaited return to paranormal fantasy was a sensational, captivating story that drew me in from the very first page. Charles has once again created a mystical, and equally terrifying, secret world of magic, along with two dashing yet despondent men, who find that they have the weight of the world on their shoulders.

Archaeologist Saul Lazenby has been all but unemployable since his disgrace during the War. Now he scrapes a living working for a rich eccentric who believes in magic. Saul knows it’s a lot of nonsense…except that he begins to find himself in increasingly strange and frightening situations. And at every turn he runs into the sardonic, mysterious Randolph Glyde.

Randolph is the last of an ancient line of arcanists, commanding deep secrets and extraordinary powers as he struggles to fulfil his family duties in a war-torn world. He knows there’s something odd going on with the haunted-looking man who keeps turning up in all the wrong places. The only question for Randolph is whether Saul is victim or villain.

Saul hasn’t trusted anyone in a long time. But as the supernatural threat grows, along with the desire between them, he’ll need to believe in evasive, enraging, devastatingly attractive Randolph. Because he may be the only man who can save Saul’s life—or his soul.

I am not exaggerating when I say I have been eagerly waiting for K.J. to make a triumphant return to the paranormal world, especially after the successes of her Charm of Magpies series, Rag and Bone, and, my absolute favourite, The Secret Casebook of Simon Feximal.

There is something just so authentic about K.J. Charles’ novels: no matter what time period the novel is set in, Charles writes about it with obvious confidence and authority. It’s so clear she works hard and researches history and historical events with finesse and dedication, and it comes across in her all of her novels – Spectred Isle is no different.

“You’re a damned brave man. People talk about courage, but sometimes I think it’s just a matter of how long one can grit one’s teeth and hold on. You know how to do that, don’t you?”

Spectred Isle is set five years after the end of WWI, the furtherest Charles has ever written about before. I’m so used to reading about dashing Georgian men that it took me a few pages to get used to the lonely 20th Century protagonists, but they quickly stole my heart.

Randolph Glyde, an arcanist from a powerful sorcerer family, is trying to protect London’s magical defences all on his own, after the ‘War Beneath the War’ killed off an entire generation of arcanists and occultists. He alone is the last of the Green Men, a group of people who work on the land and are allowed to borrow some of the land’s power, and in turn, protect the land and the people from those who would harm it. He puts a lot of unnecessary pressure on himself. He detests most people, and is quite up himself, but he is also very lonely and is struggling under the weight of his self-imposed responsibilities.

And in comes Saul Lazenby, disgraced archaeologist who continually finds himself in mind-boggling situations that he can’t make sense of – all he knows is that he keeps bumping into Randolph in the strangest circumstances, and he wants to know why. I felt so much for Saul and immediately formed an emotional connection with him. He is deeply lonely, due to his secret past, and all he wants is for someone to acknowledge him – to know that he is a good person, and that he deserves love and friendship. Saul, isolated and friendless, wants, with everything he is and everything he has. He is easily one of Charles’ most empathetic characters, and one every reader will immediately like.

The plot is a little slow, and it takes a while before the immediate storyline is introduced, but the chemistry between Saul and Randolph more than makes up for it. The chemistry between the characters is tangible, tense, but also vulnerable, as they show a side of themselves that they had kept secret for so long. The novel was also startlingly funny, and I didn’t expect it to be so. Saul and Randolph’s banter was top-notch, and the many occasions where they bumped into one another featured exasperated humour, and I found myself laughing alongside them.

“What did your family do with your black sheep, if not disowning?”
“Killed them, mostly.”
“Oh, that’s much better.”

I think my favourite part of the novel, and indeed any K.J. Charles novel, is learning about a new period of history, specifically how queer men lived and loved during a time where homosexuality was slowly becoming overt, and yet still illegal. In the novel, gay men and women are still forced to hide their orientation, but you can feel that change is in the air. This extends beyond attitudes to homosexuality, as England was trying to recover and live in a post-War world, a world where the aristocracy was all but extinct and the suffragette movement was gaining traction. Reading a K.J. Charles novel is like being back in a school classroom, learning history all over again – but far more pleasurable.

As with the first novel in a series, much of Spectred Isle is setting up for the next novel in the series, and this is one I am particularly excited for. I can’t wait to continue reading this fascinating series, and dearly hope we see more of Randolph and Saul in the next book. K.J. Charles’ Spectred Isle is a romance that you do not want to miss out on. Like always, K.J. Charles has created a fantastical world and original characters, mixed in with her  distinct brand of magic.

Spectred Isle is set for publication on on August 3rd, 2017. Any quotes used in the review should be checked against the final published copy.