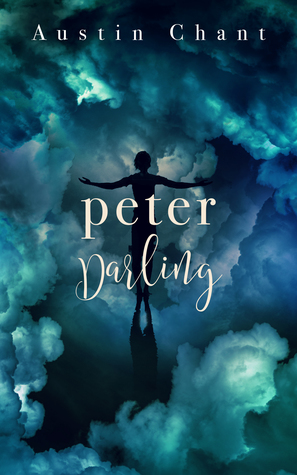 Hook gave a low chuckle. “Your obsession is flattering, Pan. And I share it.”
“Obsession?”
“Is that not what they call it,” Hook said, “when two men can think of nothing but each other?”

Thank you very much to Less Than Three Press and Netgalley for providing a copy of the novel in exchange for an honest review.

Peter Darling is an exquisitely touching LGBTQI retelling of a fairtytale classic that burrows its way into the reader’s heart so subtlety and quietly, you have fallen in love before you are even aware of it.

Ten years ago, Peter Pan left Neverland and grew up, leaving behind a world of youth and dreams, and resigning himself to life as Wendy Darling. Years later, Peter has come to realise how lonely and uncomfortable life as a woman has always been, and so he returns to Neverland to reclaim the life he once had. But everything has changed: the Lost Boys are no longer boys, and the pirates lead boring and dull lives, no longer participating in the war games they used to. When Peter returns, he reignites the mighty war between the Lost Boys and the pirates again and he feels happy for the first time in ten years. But when the war suddenly becomes deadly, Peter and his old nemesis Captain Hook are forced to spend a long period of time with one another and Peter is startled when he begins to feel a shocking attraction toward the pirate king – as well as the realisation that he no longer knows which of them is the real villain.

When I read the synopsis of this novel, I immediately knew I would love the book, but I was still surprised by the intensity of my admiration. Austin Chant has taken a beloved but old fairytale and breathed new life into it through the most unique and exciting way. I am ashamed to admit that this is the first trans novel I have read (terrible for someone who is such a powerful advocator for the LGBTQI+ community, I know) and I thoroughly enjoyed my reading experience.

We all know the tale of Peter Pan, that exasperating but amusing boy who does what I sorely wish I could: he doesn’t grow up. But in Chant’s version, Peter did grow up and what’s even more intriguing in that Peter was not born as “Peter”; he was known as Wendy Darling and “Peter Pan” was actually a persona child Wendy created as a game to play with Michael and John, Wendy’s siblings. But the “game” meant so much more to young Wendy: it showed him that he did not feel like the girl his parents’ constantly forced him to be; he IS Peter. Wanting to live life as a free boy, Wendy was whisked away to Neverland by Tinkerbell where he became Peter and was even given a boy’s body. Peter stayed in Neverland for a month, forming the Lost Boys and terrorising Captain Hook and his crew of pirates. He returned home to resume his life as Wendy Darling, but now Peter is back and wants to reignite the feeling of freedom that had been sorely missing from his life as Wendy.

As we are already familiar with the world of Peter Pan, Chant does not have to waste time developing world building or providing long-winded descriptions of Neverland (although the scenery is depicted). As a result, Chant had far more time to dedicate himself to the

most breathtaking character development I have read in a long time. At the beginning of the novel, Peter is the same Peter we knew from our childhood: cocksure, arrogant, reckless and impulsive. He thinks of nothing but fighting pirates and reigniting the glory from his youth, so much so that he puts his Lost Boys in danger. He acts first and thinks later, which gets those closest to him killed. But as the novel progressed, Peter slowly begins to change and he understands how different Neverland is compared to when he was a child, and that that might be a good thing.

“I suppose you never gave any thought to the adults who had to deal with your games,” [Hook] said. “Imagine having a well-cultivated pirate crew and an established career as the terror of the seas, only to have some bloody ten -year-old show up claiming he’s the spirit of youth and joy and your unholy nemesis. Oh, and he’s rallied a bunch of other little boys to come and kill you.”

His relationship with Hook is the driving force of Peter’s development. The more time they spend with each other, they more they realise that they are not enemies – in fact, they could be so much more than friends. I was thrown by the incredible enemies-to-lovers romance that Chant so subtly developed. It happens quietly, almost delicately, and before you know it, the sexual tension between the two enemies has become tangible, when less than five chapters ago, they were ready to kill one another. This is so impressive considering the novel is only 164 pages long. Chant’s writing skill is even more admirable because of this.

The romance is, as I mentioned, subtle at the beginning, but when it becomes obvious, I was on the verge of tears from the sweetness, the constant reassurance, the reaffirmation of consent. I have read a few reviews where some people were a little uncomfortable by the age gap, but I would not worry about it. Peter is definitely of consenting age – 20? 21? – and the age difference was quite exciting (but that’s just a personal preference). The mild sex scene was touching and not at all graphic, so the few readers who abhor romance scenes do not need to worry needlessly. It is not explicit – it is tender and loving.

“Clothes, adventure, and a worthy opponent,” Hook said, shooting him a look. “Who could ask for more?”

Peter Darling is by far one of the best novels I have read so far in 2017. I am so thoroughly impressed by Chant’s writing, his unique retelling and the elaboration of long beloved and old characters. I will be reading anything else Chant publishes.

Finally read and conquered this book! 5 stars
Yesterday, Piranesi won the Women's Prize for Fiction 2021! And I couldn't be happier because I absolutely adored this book when I read it last year.
I am obsessed with my new mug 😍 Made a great coffee this morning in it !
New Fence book just dropped! 👀
Thank you so much to @ej_beaton for sending me a copy of her debut fantasy novel, The Councillor. I was already so excited to read this book by an Australian author, and now that I own a copy, I'm even more excited!
Having fun rearranging my bookshelf with signed copies!