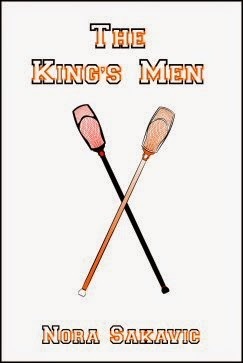 I am so proud of Nora Sakavic for what she achieved with the final novel in her All for the Game trilogy, The King’s Men. This novel was twice as long as the first and second and twice as entertaining, heartbreaking and beautiful. I am still riding a high after finishing this book.

The King’s Men concludes Neil’s journey. He has returned from spending two weeks living at Evermore, the underground headquarters of the Edgar Allen Ravens, where he was tortured every day by the sociopathic Riko, the self-proclaimed ‘King’ of Exy. Neil has learnt that he will do anything for his fellow Foxes, but he didn’t think that would include kissing one. Neil slowly realises that his feelings for Andrew are growing stronger every day, but Andrew is adamant that he feels nothing. Neil not only has his fledgling relationship with Andrew to worry about, he also has to concern himself with the daily, anonymous texts he receives that are counting down to something; the Foxes’ growing chances of reaching the Exy championships; and the threat of his father who has never been far behind.

For a contemporary novel, there was an excessive amount of suspense: suspense during the Foxes’ Exy games, suspense during the torture scenes, and even suspense during Neil and Andrew’s kissing scenes. There was not one moment of this novel where I wasn’t on the edge of my seat, biting my nails, eyes anxiously glued to my computer screen. Sakavic has a knack for developing suspense and tension so naturally, you almost don’t realise it until you’ve fallen head first into a panic-inducing scene. The Exy games were amazing to read and I was so excited to read how much the Foxes have improved and how well they worked together as a team. Like Neil promised, the Foxes were winning every single game and fast approaching the championships, much to Riko’s chagrin. The fact that in Exy no one person played an entire game, rather they played halves or even quarters and then had their substitute take over, except for the Foxes, is incredible. I was so proud of these ragtag group of nobodies banding together and putting everything they had into each game.

Andrew dug a finger in Neil’s cheek and forcibly turned his head away. “Don’t look at me like that. I am not your answer, and you sure as fuck aren’t mine.”

I have been patiently waiting two whole books for this supposed, much-talked about on Tumblr, romance that was to occur in the final novel of the series. I analysed each interaction Neil had with all of his teammates, trying desperately to discern who he could possibly get with; Neil, this boy who was terrified of commitment and only ever thought about Exy and staying one step ahead of his past, was supposed to fall in love? It didn’t seem possible, until I was actually reading it and I was absolutely delighted when it was revealed to be Andrew. In hindsight, I can actually recall moments between the two that can potentially be read as semi-flirtatious – if one views threatening death on another as flirting – and am surprised I didn’t pick up on the budding tension between the two earlier on. Now that I think about it, there were a few scenes in The Raven King that should have clued me in earlier.

The kissing scenes between Neil and Andrew were written perfectly and with so much respect. Andrew, understandably, had issues with intimacy and sex and didn’t like it when people touch him, even by accident. Neil knew this and allowed Andrew to take control during their make-out sessions. I loved that Sakavic wrote the scenes that way, reaffirming the consent. The awkward beginning was so sweet, I couldn’t help but giggle every time these two joyless characters kissed or talked about their feelings. I still can’t wrap my head around the fact that a miserable, broken boy and a frightened, lying boy fell for one another.

“Thank you,” he finally said. He couldn’t say he meant thanks for all of it: the keys, the trust, the honesty and the kisses. Hopefully Andrew would figure it out eventually. “You were amazing.”

My favourite scene was when the team went away to a cabin in the mountains and spent the weekend together. I had a huge smile on my face the entire time. Andrew was a completely different person as he had somewhat accepted his and Neil’s developing relationship, Neil was finally learning to open up and be honest with his friends, and the Foxes were so incredibly supportive over Neil’s history. I personally loved the passage where Andrew and Neil were forced to share a private bedroom away from the rest of the gang. The jokes Allison and Nicky made were hilarious, and the attempt to lighten the dark tone of the novel was appreciated, as sometimes the constant darkness could feel overwhelming.

I didn’t think it was possible to fall even more in love with Andrew, but somehow I have. My favourite characters are those that are broken or damaged in some way, and Andrew’s tragic backstory only pulled on my heart-strings. Throughout the other novels, Andrew was seen as an apathetic character: he didn’t particularly care about anyone and he showed absolutely no interest in living life. In The King’s Men, there were several scenes where Andrew showed that he did care, that he even loved, and this is something we should appreciate. What I loved about Andrew was that his relationship with Neil doesn’t suddenly cure him of his issues. The trauma he experienced as a child will always be with him, but being open with someone – Neil – can help in alleviating some of the pain he felt.

Neil. Oh, Neil, you selfless asshole. The things he does in this novel are unbelievable and incredibly touching. He has grown so much from the terrified, jumping-at-loud-noises, flinching-at-yelling, naïve boy that he was in The Foxhole Court. Neil has sacrificed himself again and again for his friends, but this time, it might be his undoing. I was a mess during one particular scene that I won’t spoil – all I can say is have a box of tissues on standby. And perhaps a shot of vodka to calm your nerves.

“Neil had been doing one stupid thing after another all year long and this has turned into one of the best years of his life.”

I loved how this novel ended. Everything that has been set up in the previous novels has finally come together in the most warranted way. Some characters got their comeuppance, others got their truly deserved happy endings. The score between the Foxes and the Ravens finally came to a head in the championships and I loved every minute of it. Sakavic’s writing was a major component of this satisfied ending, as her highly-skilled prose perfectly expressed emotion and tone.

It still boggles my mind that a trilogy about sports, something I have absolutely no interest in, has quickly become one of my all time favourites. Seriously, I rather watch paint dry than watch any game of sports. Perhaps that’s why I love this series so much – because I didn’t expect to. I love the torn-down and broken characters, who have been given a third, fourth, fifth chance at redeeming themselves and doing something more with their lives. I love how, despite the Japanese mafia and crime element of the text, the novel still reads as realistic and natural. Every scene flows seamlessly from the previous one and into the next. I just can’t rave enough about this book, which is why I am giving it the star rating it truly deserves.

“Everything I needed, you already gave me. You let me stay.”

The King’s Men was a fantastic conclusion to an amazing series. I read it took Sakavic two years to write this book, which doesn’t surprise me at all as every plotline was so neatly tied up. There was some talk about Sakavic writing a fourth novel, though she has decided against it. I hope she changes her mind because I would buy that fourth novel in a heartbeat. In the meantime, she has compiled a master-list on her Tumblr page of all the questions about the Foxes’ and their futures she has answered. At least whenever I want to know more about Andrew and Neil’s future together, I have somewhere to go.

3 thoughts on “The King’s Men by Nora Sakavic”