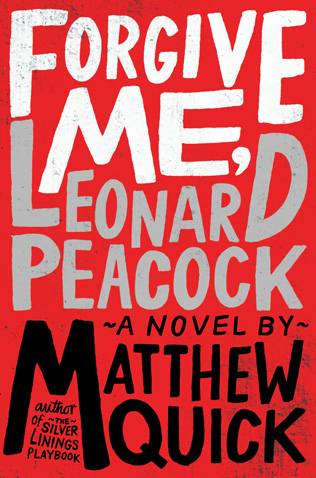 “I feel like I’m broken—like I don’t fit together anymore. Like there’s no more room for me in the world or something. Like I’ve overstayed my welcome here on Earth, and everyone’s trying to give me hints about that constantly. Like I should just check out.”

Matthew Quick’s Forgive Me, Leonard Peacock was a poignant, moving novel that everyone needs to read. Combining humour and hope, the novel targets the most controversial issues effecting teenagers today: depression and school shootings.

Forgive Me, Leonard Peacock is a dark book. Leonard is in a really bad place at the beginning of the novel. It’s his eighteenth birthday and, instead of celebrating, he plans to kill his former best friend, Asher, and then himself. Before that happens, he wants to say goodbye to the four people most important to him: his Humphrey Bogart obsessed neighbour; the musical prodigy he never talks to; the Christian home-schooled girl he has a crush on; and his favourite teacher, Herr Silverman. As Leonard speaks to each of these people, his secrets and the events that led up to this moment are slowly revealed.

“Not letting the world destroy you. That’s a daily battle.”

Leonard is probably one of the loneliest characters I have ever read. My heart broke every single chapter as I read his interactions with his friends. He continually mentions that if just one person remembered that it was his birthday, he wouldn’t go through with his plan. But no one does. And then the tears started (mine). There is a part of him that just wants to die and be rid of this world and the horrors of it, but a larger part of him is waiting to be saved. Leonard’s voice is very honest and you can’t help but feel for him, which lends an authenticity to the book. Leonard enjoys looking at complex situations and asking the hard questions, which the novel replicates. The book constantly questions the reader over the role of religion, of the purpose of life and death, and the effects of parental neglect and depression.

I loved Herr Silverman, he was an amazing character. If only I had teachers like this when I was in high-school, teachers who actually care for their students and don’t treat them like they’re overgrown babies, but rather young adults with valid opinions of their own. He is the only one who can see through Leonard’s façade and guesses that Leonard is suicidal. He genuinely cares for Leonard and promises that he will be there for Leonard whenever he needs a shoulder to cry on. There is a little mystery surrounding Herr Silverman which I was eager to learn about – why he doesn’t ever roll up his sleeves. The answer is just as sad as you can imagine, but hopeful, too. (I do have to say I absolutely hated Herr Silverman’s boyfriend. He was selfish and rude and I wanted Herr Silverman to just dump him.)

The writing was very confronting. As we are experiencing the book through Leonard’s eyes, his feelings warp and shape his experiences. I found myself agreeing with him during many of his conversations, especially when he spoke about religion. I honestly thought I would not like Leonard. When I read the blurb of the book, I suspected Leonard would remind me too much of that stereotypical, creepy “nice guy” who constantly laments over why he’s single because he’s such a “nice guy” but then trolls and harasses women. You know the kind I’m talking about. Thankfully, that wasn’t the case here, but I think that was due to Quick’s writing style. As mentioned earlier, Leonard is a very honest character, sometimes too honest, and he doesn’t shy away from the uncomfortable. This made the book feel hyper realistic and I was blown away by the emotional impact Leonard had on me.

“DO ANYTHING! SOMETHING! Because you start a revolution one decision at a time, with every breath you take.”

However, I was confused by the ending of the book. It just kind of … ends. Leonard is not a stable boy, and I don’t think he’s going to be ok or accept what had happened to him years ago. He really needs professional help, otherwise he will only revert back to his state before the beginning of the book. I think the flatness of the ending suggests that the reader is supposed to come up with their own ending for Leonard. It definitely ends on a hopeful note, so we are led to believe that Leonard will be ok in the end, but that negated the realistic feel of the entirety of the book. People don’t just get over something as traumatic as what Leonard experienced (I won’t say what happened as this is the heart of the novel and perfectly explains Leonard’s decision-making). I felt that the ending didn’t match the tone and feel of the rest of the novel, which really disappointed me.

4 thoughts on “Forgive Me, Leonard Peacock by Matthew Quick ”