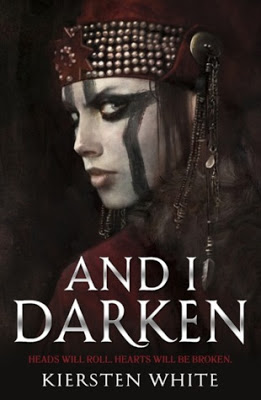 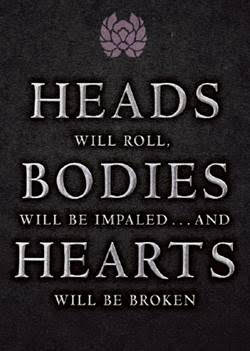 “So the question becomes, Daughter of the Dragon, what will you sacrifice? What will you let be taken away so that you, too, can have power?”

Let’s just all take a moment to appreciate how fierce this book cover is. Whoever designed this, deserves an award.

The first book in a new trilogy by author Kiersten White has been on my “waiting-to-be-released” list for some months, and I would stare at this list for minutes at a time, wishing that time will go faster so I could finally read it. I was so ecstatic when I finally got my hands on it and I devoured it in two days.

And I Darken was everything I wanted in a book and more. It was based on rich history, with a strong, feminist protagonist, an incredible plot and written absolutely beautifully.

Ladislav Dragwlya is the savage and wild daughter of Vlad Dracul, the prince of Wallachia. She is fierce, strong and more capable than any man, and ready to prove it. She and her younger brother, Radu, spend their days in her beloved Wallachia, vying for their father’s attention. Overnight, Lada and Radu are wrenched from their homeland and sent to be raised in the heart of the Ottoman Empire in the sultan’s court, to be held hostage for their father’s mistakes. Ruthless and brutal Lada detests her new prison and keepers and only desires to return home, but gentle Radu blossoms and finds himself drawing closer and closer to the call of Islam. The children become pawns in a political game and must learn to manipulate and charm if they have any hope of surviving. When they meet Mehmed, the illegitimate son of the sultan, their lives are changed forever. Lada is torn between her growing feelings for Mehmed and her desire to return home and claim her birthright. Radu gains position and power in the sultan’s court while trying to understand the different love he feels for Mehmed, stronger than that of a friend. Meanwhile, a dangerous threat hovers above the three and threatens to take everything they hold dear.

Lada was an incredible character – I was so impressed by White’s ability to write an engaging, feminist woman who doesn’t allow men to make decisions for her or treat her like they treat any other woman of this era. Despite her savagery and, at times, cruelness, I felt like I could really connect with her, too. She has so much confidence but still suffers from the same anxiety and awkwardness any child at her age does, female or male. At the beginning of the novel, she is a child and the reader observes as she grows into a young woman who becomes even more determined to reclaim her destiny and birthright. Lada is actually based on a real historical figure, Vlad the Impaler, the vaivode (military prince) of Wallachia (modern-day Romania). The myth surrounding this real-life figure has changed so much over time: today, we are more familiar with the story of Vlad as Dracula, the vampiric ruler of Transylvania. While the real-life Vlad was certainly savage enough to inspire such stories, he was no vampire, but was just as scary. I am so excited for the next two books where White can explore Vlad’s savagery in the form of Lada. A real historical event I am dying to read is when Vlad impaled 20,000 of his own people on spikes and the invading Muslim army saw this, turned around, and went back home. I wonder if White’s version of Vlad will live up to the same name: Impaler.

Radu, too, was a wonderful character. The younger brother of Lada, he is constantly overlooked due to his gentle and sweet nature, but he learns to use his good looks and innocent features to get what he wants. Mehmed was a tricky character – there were times I liked him, and other times I thought him selfish and annoying. He falls in love with Lada, who does not know if she returns his feelings (as much as he does), while Radu falls in love with Mehmed. It’s a sad love triangle, but an interesting one I look forward to watching develop over the next two books. In history, Radu actually becomes one of Mehmed’s male concubines, so I wonder if White will evolve Radu and Mehmed’s relationship to match their real-life counterparts. If so, this will have dire ramifications for Lada, if her brother and the man she thinks she loves, sleep together.

The plot was fascinating. Beginning in childhood and progressing through their teenage years, we watch Lada and Radu grow up and come into themselves. The first book centers on Mehmed’s rise to become sultan, with Radu and Lada on the outskirts. The novel ended with a clear picture of Lada and Radu’s next journey.  The first book sets up much of the rich history of the story, while the second book will almost certainly lead to action and war. I cannot wait to read the second book! Don’t know how I will survive an entire year of waiting.

One thought on “And I Darken by Kiersten White ”