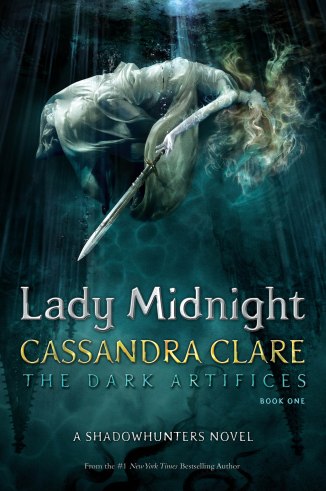 Cassandra Clare’s new series begins with Lady Midnight, an exciting new look at the Shadowhunter world after the events of The Mortal Instruments series. Set five years later in Los Angeles, the story focusses on Emma Carstairs and her life with the Blackthorn family at the Institute. A cold peace has occurred whereby Shadowhunters have put impossible limits and laws on the fey after the Seelie Court betrayed their alliance with the Shadowhunters and joined against them with Sebastian Morgernstern.

Emma Carstairs is parabatai with Julian Blackthorn, who secretly runs the Los Angeles Institute as his uncle, the head, is unable to, due to mental illness. The story follows when the Seelie Court returns Mark Blackthorn to his family after several fey have been found murdered the same way Emma’s parents were during the infernal occupation of the Institute by Sebastian. Everyone always said Emma’s parents were killed by Sebastian’s army, but she never believed it, and it turns out she was right.

Emma is the best Shadowhunter of her generation – she wants to be exactly like Jace Herondale, one of the most famous Shadowhunters in their history. Julian is in charge of his very large family, a role that has been thrust upon him since the age of 12 when his father was turned by Sebastian’s army. Mark was an absolute treasure – his mannerisms after years of being with the fey remind me of a Victorian/Regency gent. Tiberius was very sweet, and the way his family single-handedly protect him from other Shadowhunters, who don’t understand his illness, which is suggested to be autism, is awe-inspiring. Livia is a protective older sister, who is sweet and funny. Dru is hilarious in her Goth faze and awkward developing stage. And poor little Octavian – I just wanted to kiss and hug him the whole book.

The search brings Emma and the Blackthorns to the sea and the creatures in a cave that protect a dangerous bounty. Secrets are unwound and come to light, secrets that threaten to destroy relationships. Julian’s love for Emma was heartbreaking to read: due to Shadowhunter law, parabatai are forbidden to be in a relationship together, for unspecified reasons. The end of the novel reveals that reason and I kid you not, my jaw dropped. It was terrible and wonderful to read those last few scenes.

I really enjoyed the interactions with the fey court and the allusions to the Unseelie King, who I have a strong belief we will be seeing in the next book. Kieran and Mark’s relationship was sweet to read, and I am worried that his feelings for Cristina will get in the way of them getting back together. I understand that Kieran betrayed Mark and his family, but I am a major supporter of LGBT characters, and I am holding out hope that they will be together, and Cristina will end up with Perfect Diego, who is actually a very sweet character.

The finale of the book was a revelation in itself: the betrayal of someone very close to the family and a reference at the very conclusion of a powerful force being awakened. Very, very excited for the next book in this series. Clare recently revealed that this series will coincide with her upcoming series The Last Hours, much like the Infernal Devices did with The Mortal Instruments. A fifth series called The Wicked Powers will also involve the Los Angeles characters and will feature a LGBT protagonist, which I am very excited about.